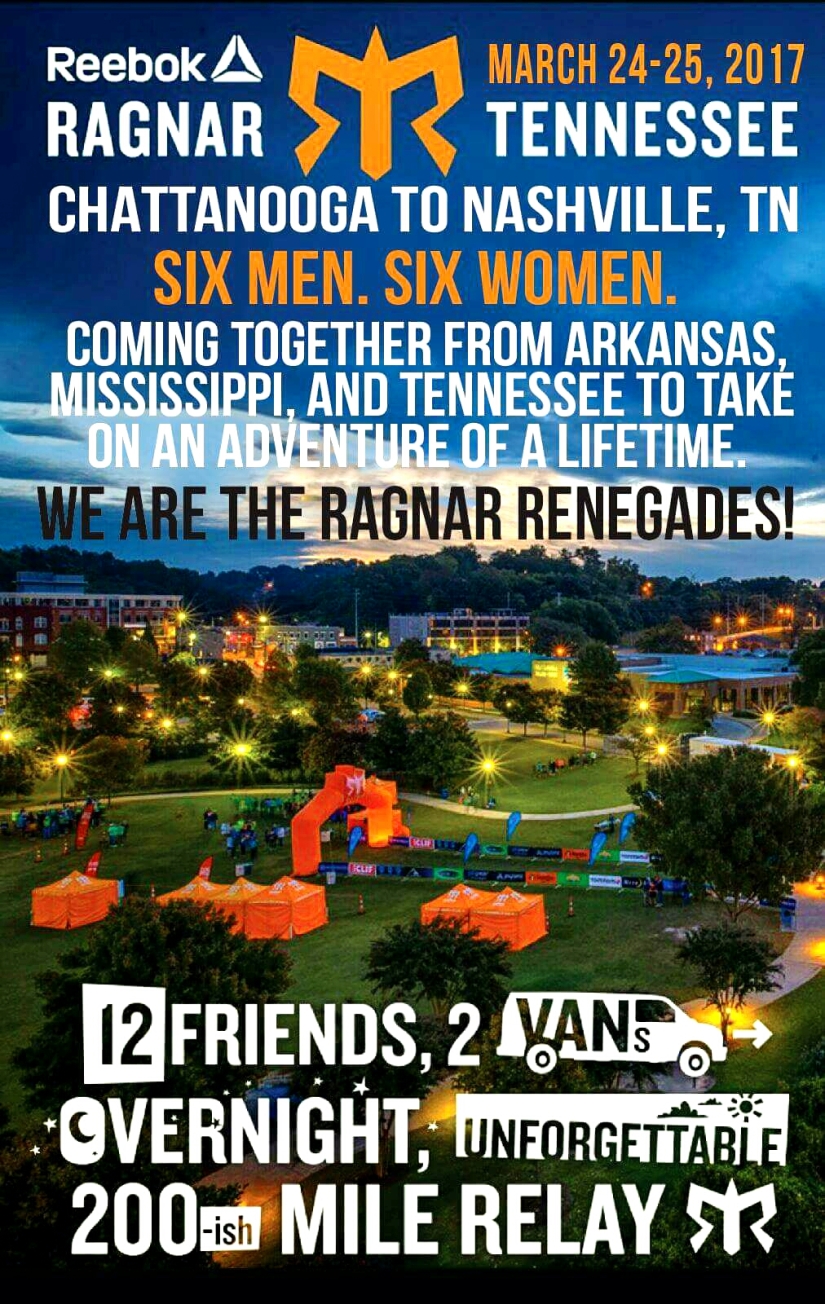 Let the amazing race begin! I checked off another awesome running journey and adventure by completing the Ragnar Tennessee Relay with 6 men and 5 women from 4 different cities in 3 different states riding in 2 vans to run 200 miles overnight on back roads, road shoulders and paved trails from the mountains in Chattanooga to the hills of Nashville, TN. We were the Ragnar Renegades!  I also did it having lost 177 lbs in 4 years. Never in a million years could you have told the 342 lb old me I would be doing anything this amazing and I would be healthy and fit enough to do it at 43 years old. Back in 2010, I developed a mantra of “Fit by 40” where I wanted to become healthy, fit, medication free, and reverse the symptoms of my diabetes and hypertension.

Through changing my diet, becoming active and now running, I did it. I’m healthy, fit, and have been med free for the past 4 years. I even reversed my chronic illinesses. Having run my first half marathon in 2014, it lead me to develop another mantra of 50 by 50. I’m still on my quest of 50 half marathons in 50 states by the age of 50. I’ve completed 14 half marathons in 9 different states since December 2014. I ran my first full in December 2016. I’ve completed every major distance except an ultra in the running community. So, Ragnar TN was no exception to my new 2017 mantra which is “The Year of Yes.”

I promised myself I would say “yes” to doing more things that would make me happy and  probably could never see myself doing or was afraid of doing due to fear. Once I heard that some teams were being formed in my hometown of Memphis, TN, I immediately said, “Sign me up!” I was ready to take on the challenge. I figured if I could train 18 weeks to do a full, I was capable of doing this.

I was assigned legs 8, 20, and 32. Hard and moderate legs with little to no van support. Crazy elevation, but I told myself I got this. Van number 2 rolled out from Memphis at 3am Friday morning. 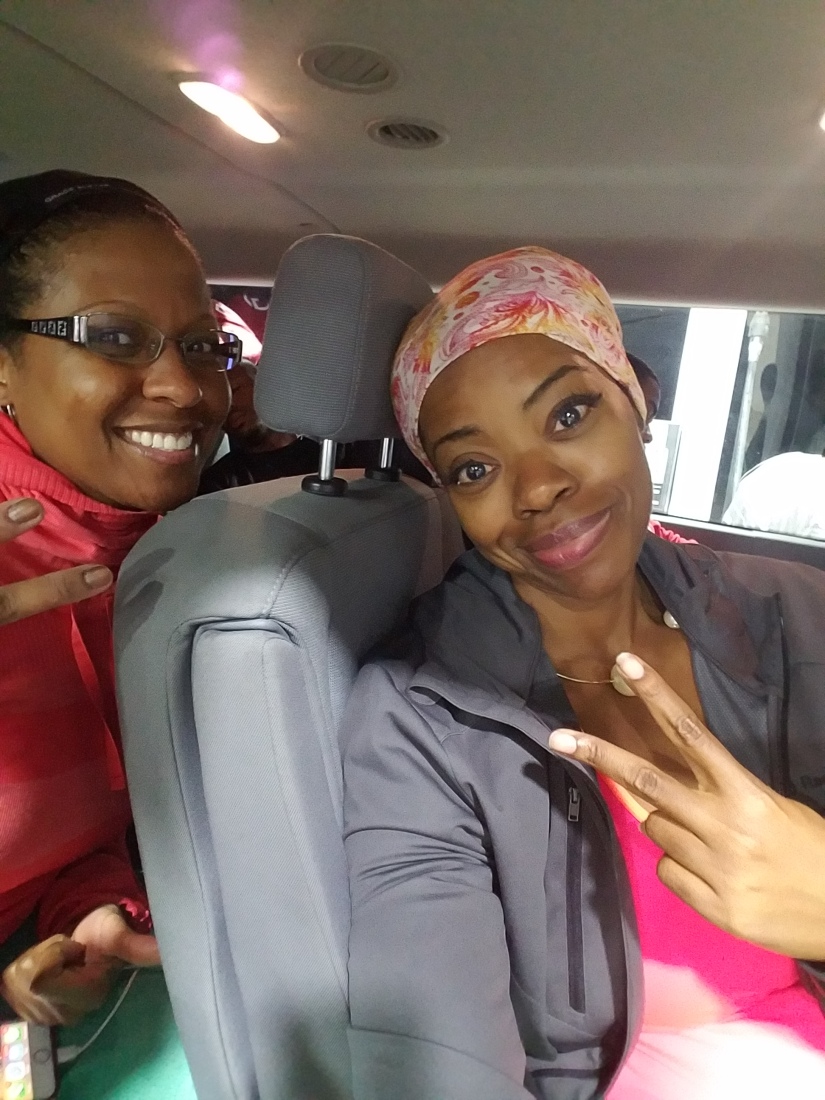 We arrived in Jasper, TN about 3 hours later to stop at Cracker Barrel for breakfast where we ran into another van 2 team of runners, but these guys were something special. They were amputee blade runners. Some were missing one or both limbs. Chris, the one who I’m pictured with, is a one leg amputee. He ran the Boston Marathon in 2014 and was scheduled to run the same legs as I this weekend with his team. 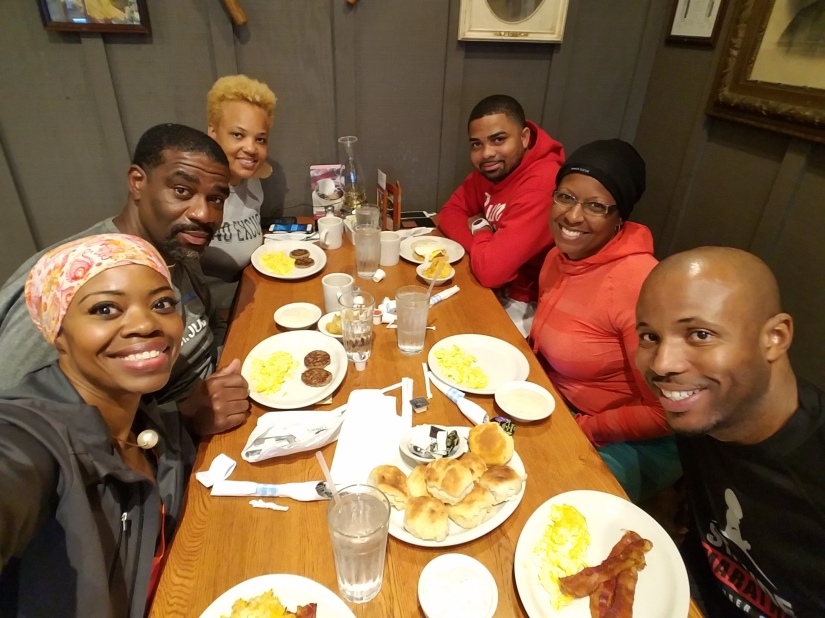 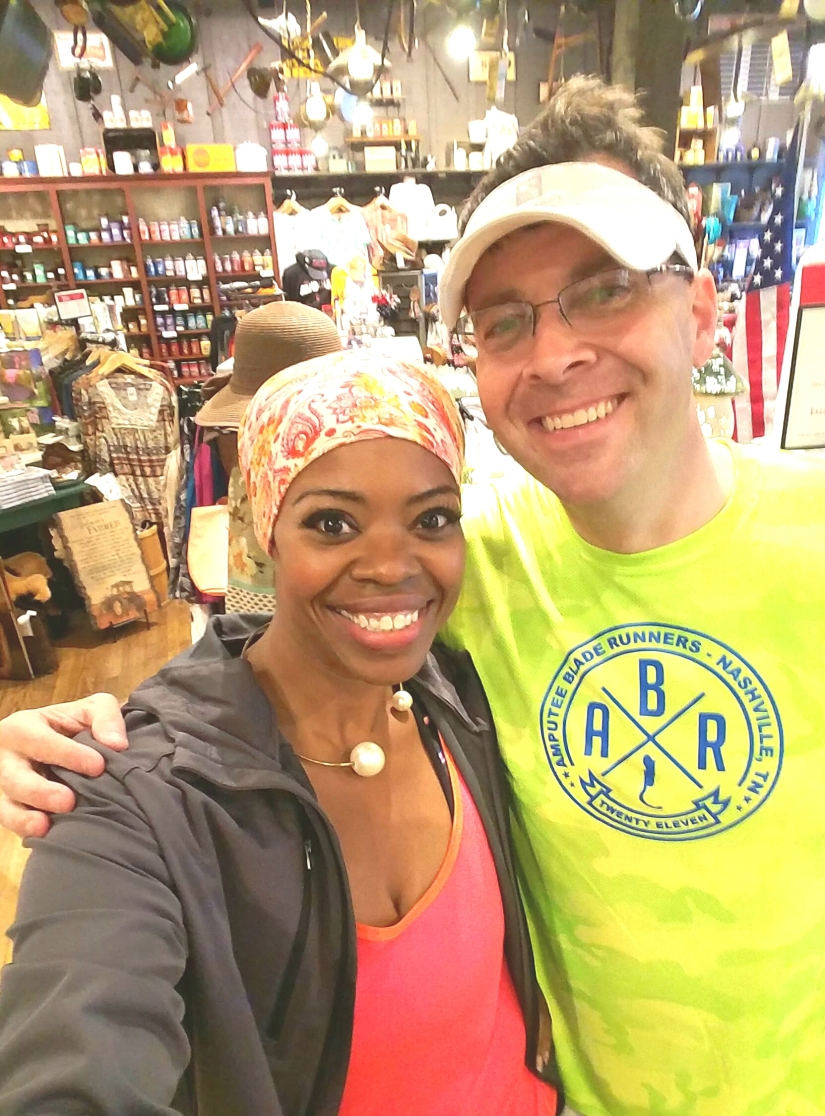 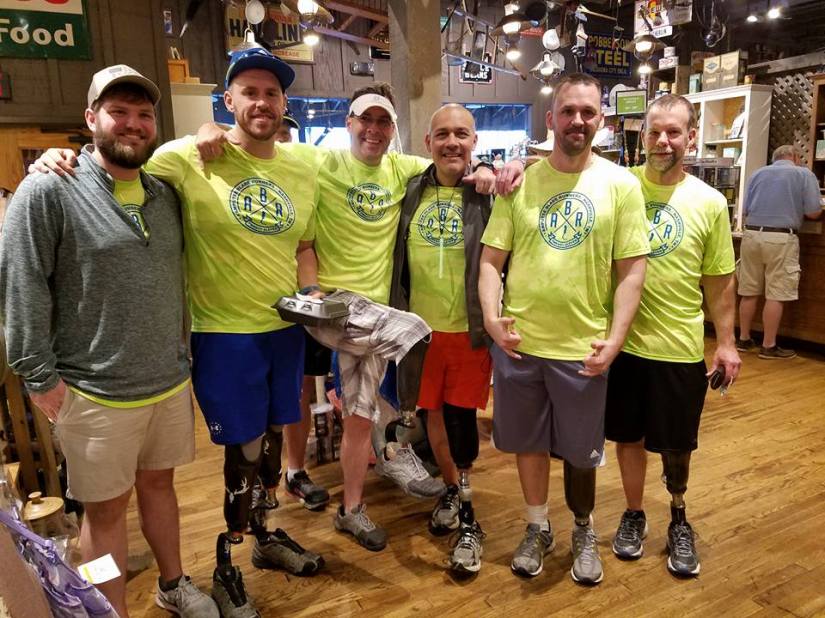 I could only imagine at the time how challenging it would be as a runner with 2 fairly decent legs to be able to run, especially Ragnar, than to run it with one leg and a prosthetic blade. 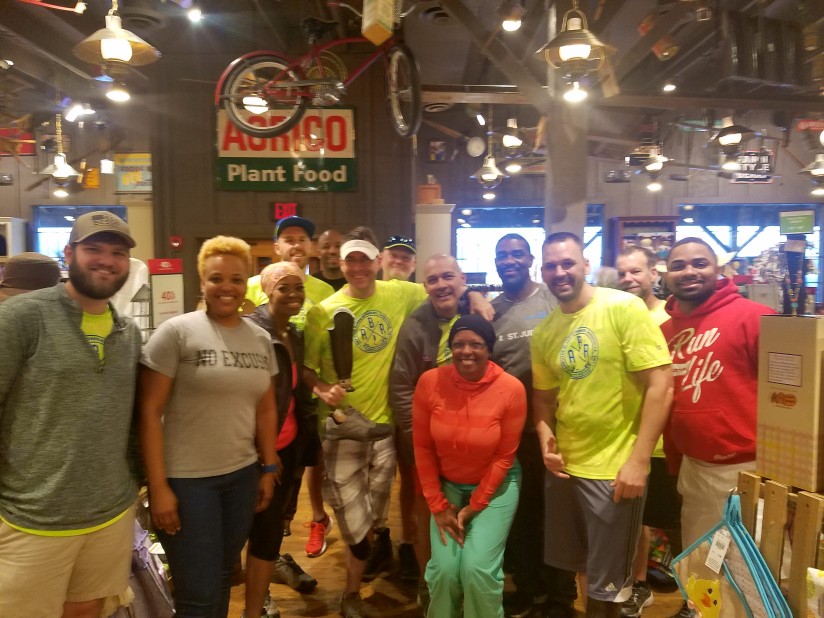 Fast forward to van 2 checking in, meeting other runners,  and starting our legs. Talking about fun and team no sleep! Who needs the show Survivor when you can run Ragnar! 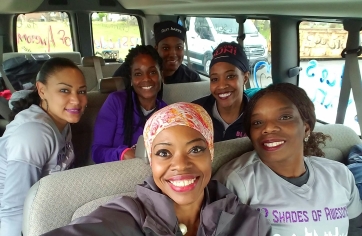 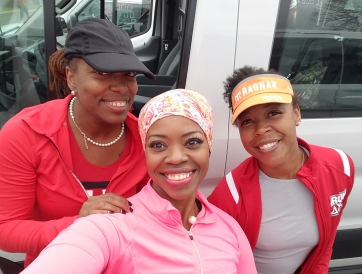 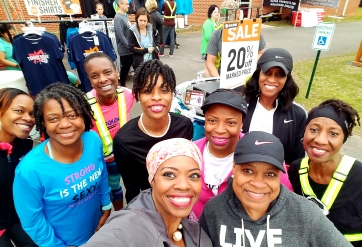 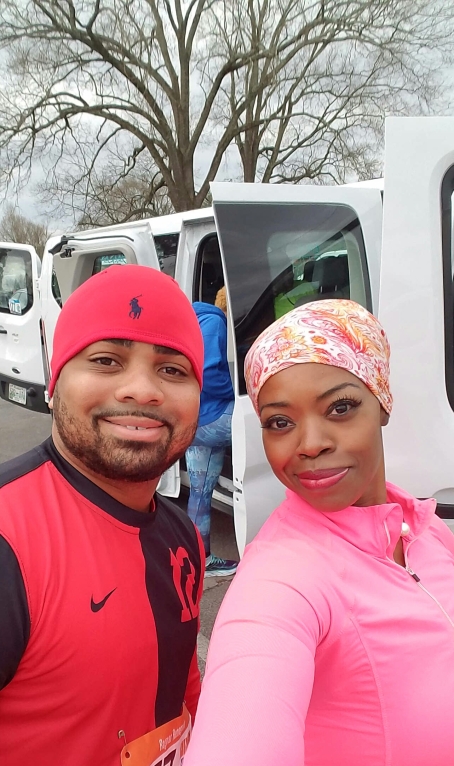 Ragnar was everything plus more than I ever expected it to be. No service in most areas so that was scary.  Change of altitude. Crazy elevations. Sleep deprived. Bathing with baby wipes. Twisting and turning roads. Unforgiving sun. Incline after incline. Running on a narrow road bend trying to avoid getting hit by cars. I’m always up for a challenge.

My second leg had me running after midnight. Sometimes, I couldn’t see one foot in front of the other because it was so dark even though I had the proper safety gear on. Pretty scary Blair Witch Project kinda stuff lol with all the strange noises, darkness and running along mountain sides during periods of time in which I was running by myself. 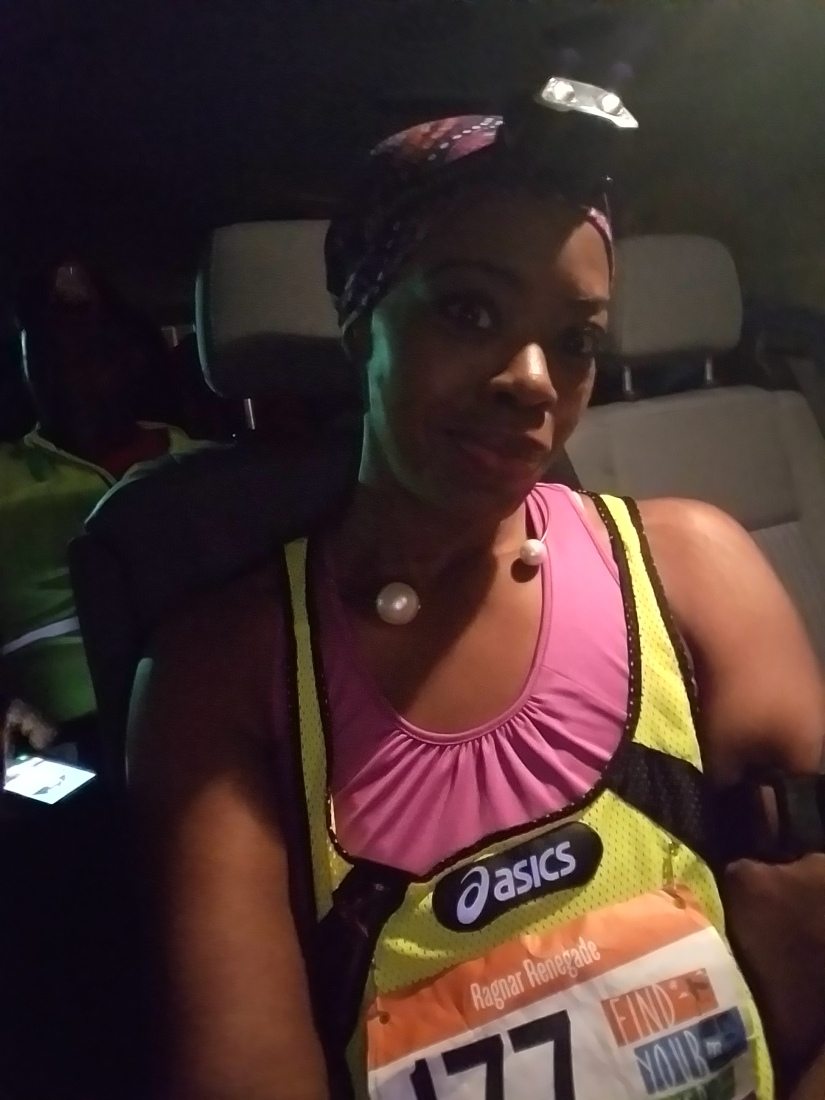 Very steep downhills that made you thought you would fall on your face and a few steep inclines that would never end. I ended up getting lost almost a mile off the course with a few other runners, but luckily a van saw us to steer us back on course. I could have let that dampen my spirit, but I knew I had 11 others who depended upon me to finish. So, I dug deep and finished my 2nd leg.

We took beautiful pics, slept anywhere we could and brushed our teeth out in the open. 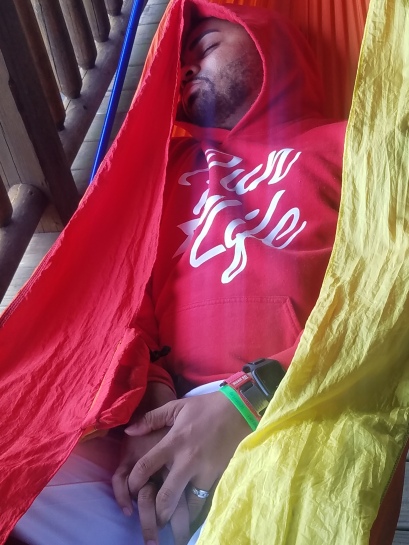 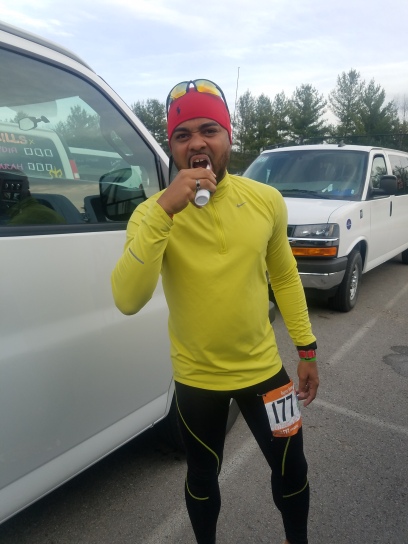 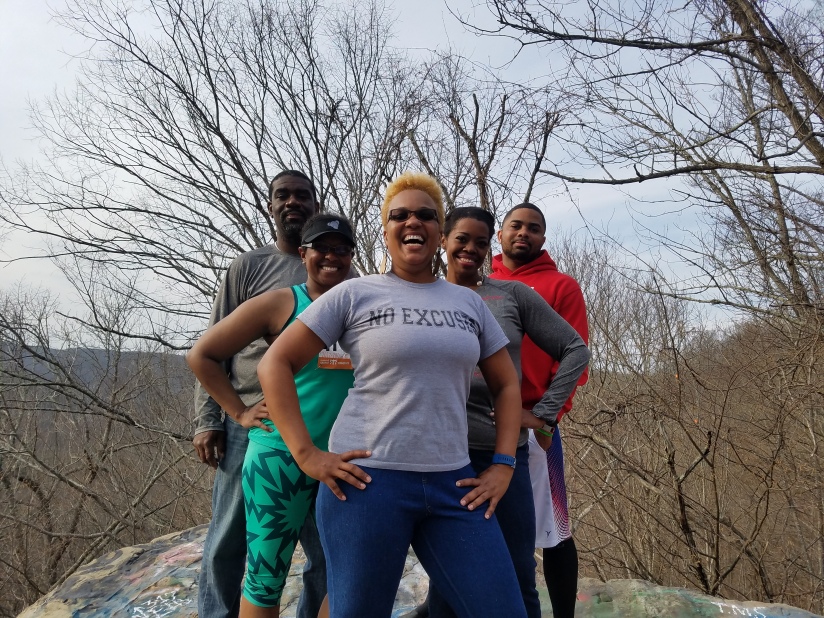 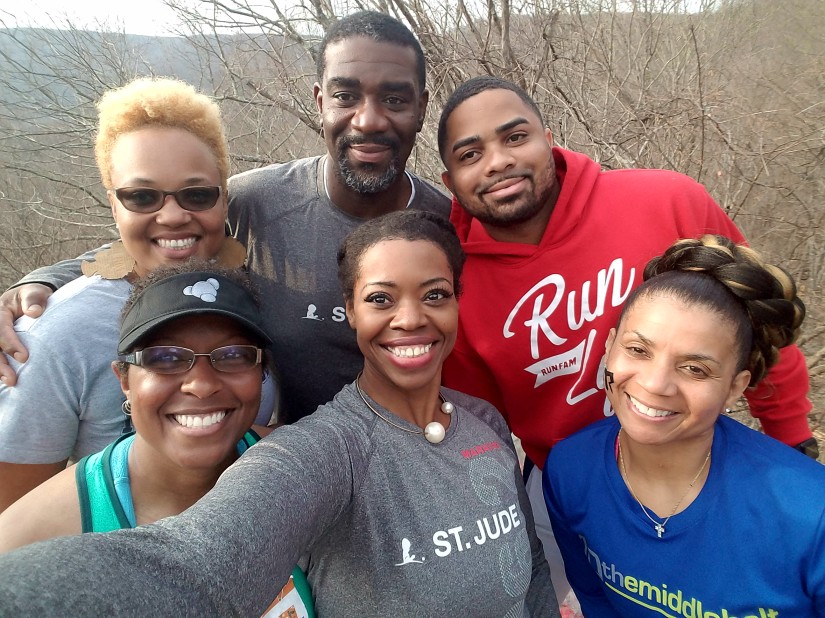 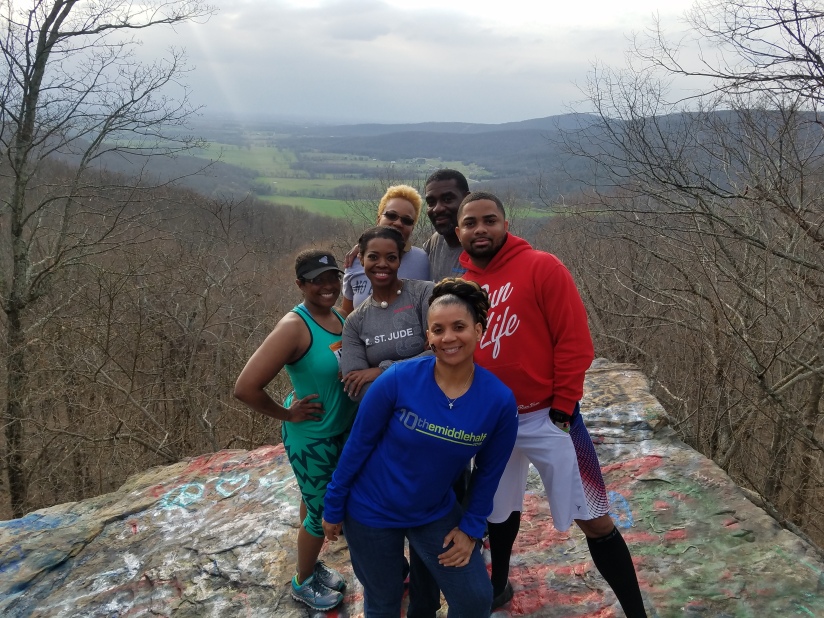 My 3rd and final leg. It was a leg structured from the fiery pits of Satan himself lol. Words can’t describe the ongoing uphills and inclines that wouldn’t stop coming. Nashville you can have your direspectuful hills and bobcats back! 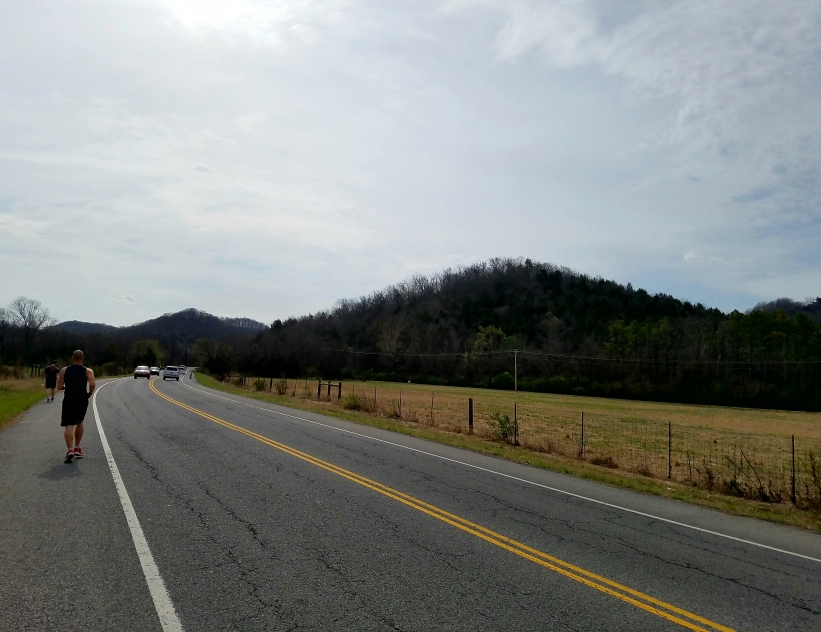 My goal was to keep it under 13 mins a mile due to the course’s elevation and I did just that with 12:59. The course said it was moderate, but that was a lie lol. There was nothing moderate about it.

I normally don’t take pics or videos during my races, but words couldn’t do this justice today. My word for the day was “Ridiculous” lol.

Thankful to my van and the Memphis BGR van #2 for checking on me to see if I was ok because they knew how hard this course was going to be and for the runner along the route who spoke encouragement over me. He said, “May the road rise up to meet you and God always be the wind against your back.” 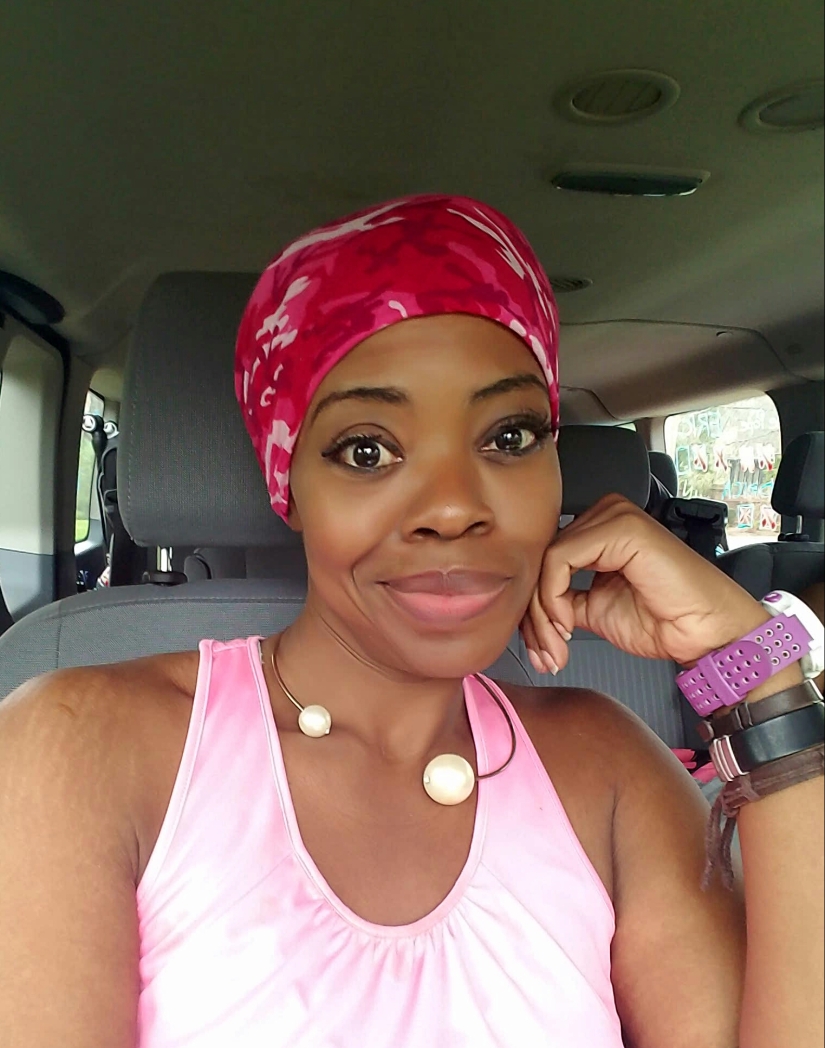 As a team, we couldn’t wait to see our guy Eric,  rolling in to the finish line. We ran it in with him because it truly was a labor of love and a blessing to do this together as a run family in 31 hours. The pavement can be your friend and unforgiving at times, but when runners come together, we’re seeking the same goal…live to run another day. You don’t get to pick your family by birth, but you do get to pick your Ragnar run family. We wouldn’t trade this challenging, most exhilarating and awesome experience in the world for we are already looking for the next race. It’s official. I’m a Ragnarian Class of 2017! 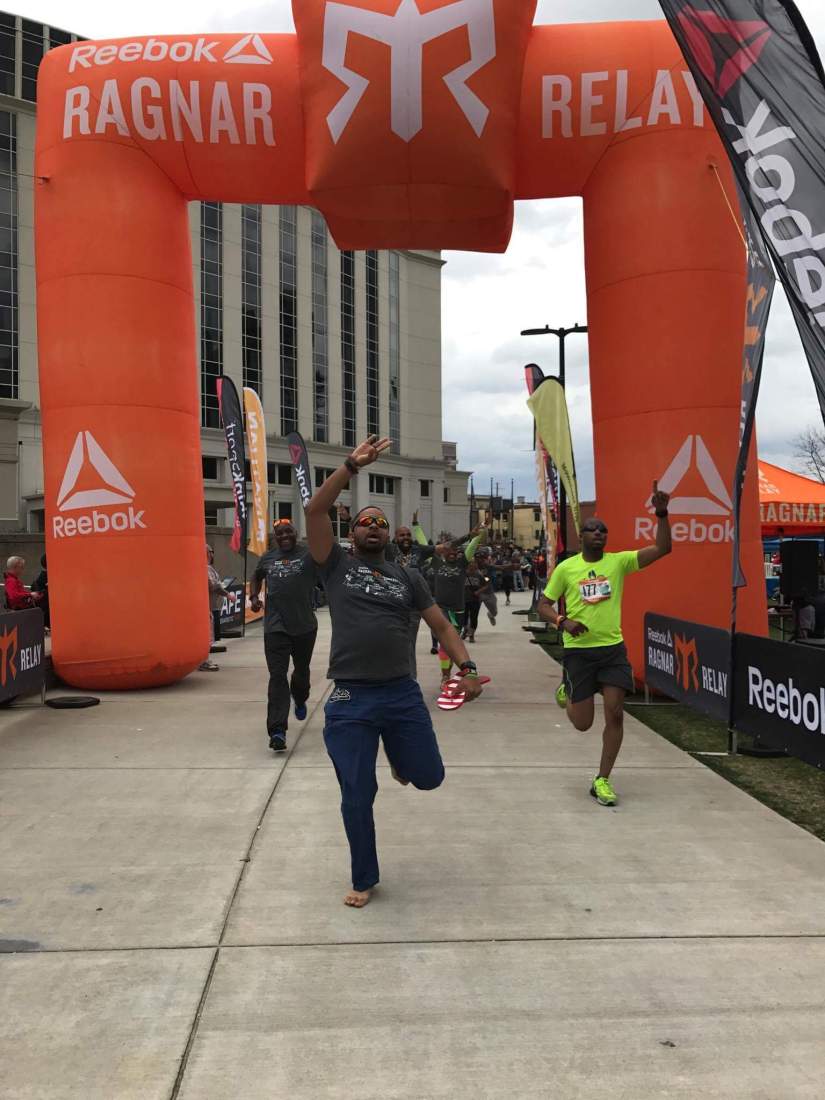 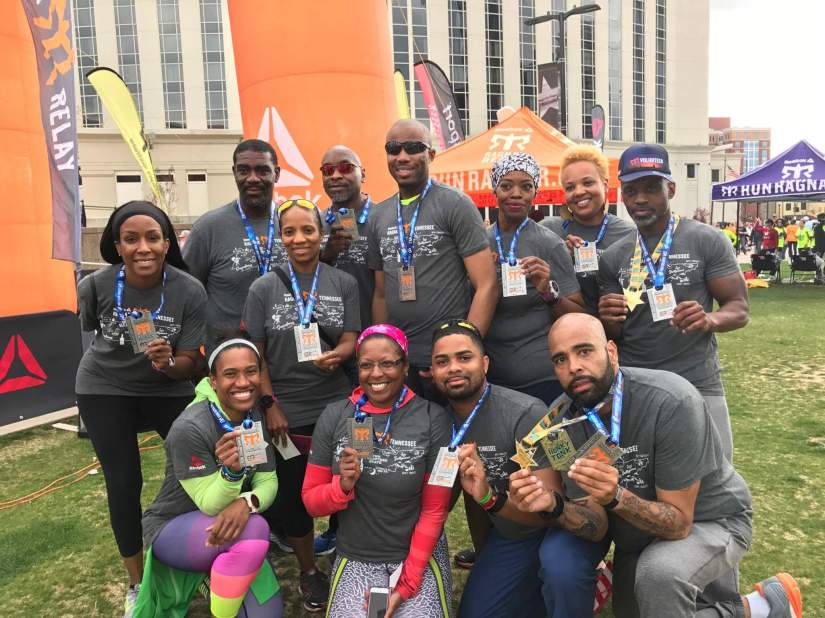 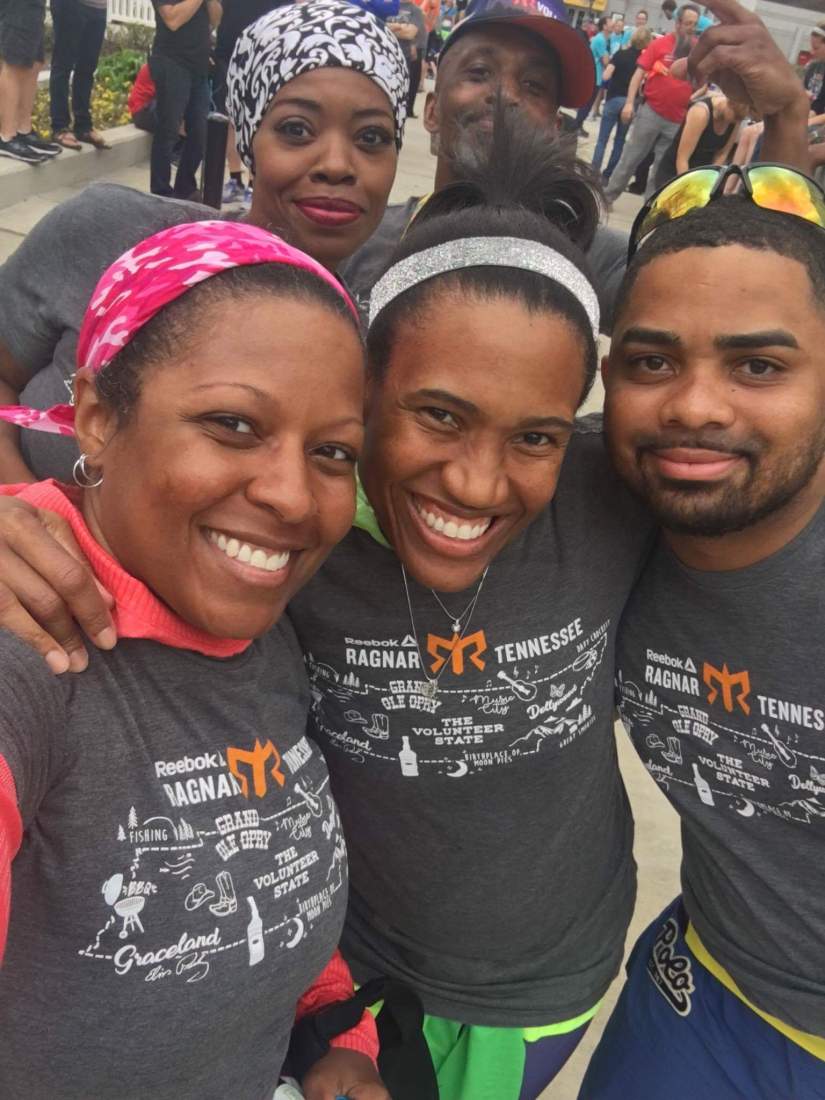 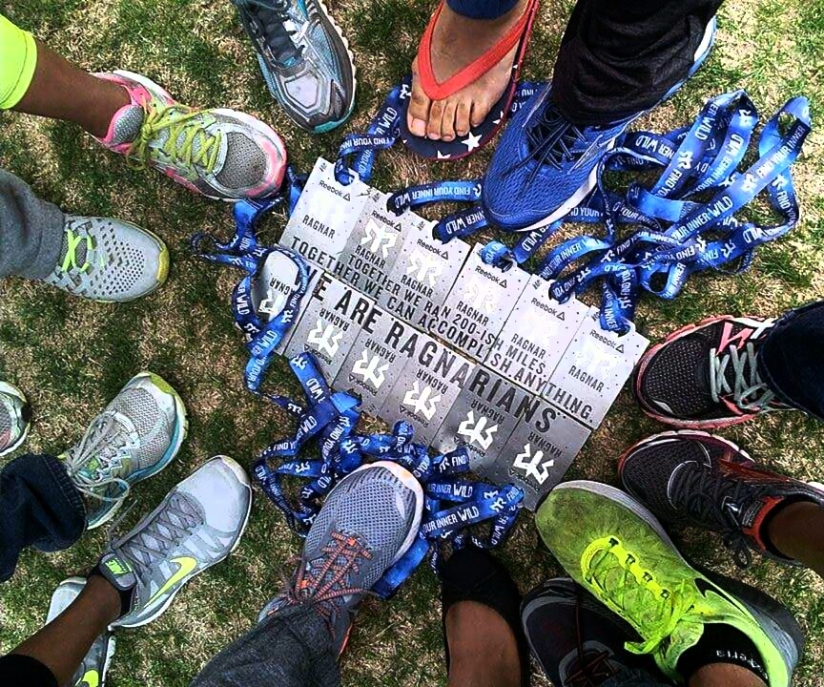 Published by Fit and Finally Free

Hi, my name is Almetria and I am a Full Spectrum Birth and Postpartum Doula, an Entrepreneur, Food and Fitness Enthusiast, Published Author, Motivational Speaker, Lifestyle and Wellness Coach, Celebrity Chef, Social Media Influencer, a Fashionista, certified group exercise instructor, Certified RYT-200 Yoga Instructor, an Avid Runner, a RRCA Certified Running Coach and a RRCA Certified Race Director. I do quite a lot huh lol. I love life and helping people achieve their dreams by creating a healthy well balanced life especially in the areas of health and fitness. View all posts by Fit and Finally Free

9 thoughts on “The Amazing Race: All Roads Lead to Ragnar”